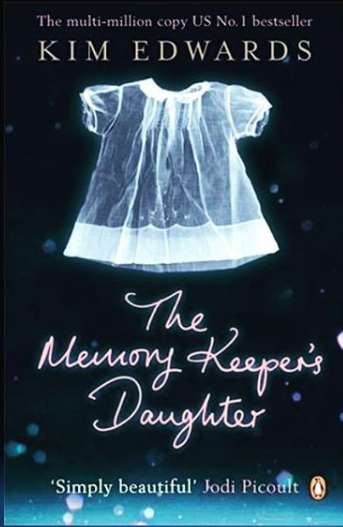 The author’s writing was wonderful. She was able to completely immerse me into her story and she managed to do it so quickly! The first chapter just pulls you in.

This book took me on a roller coaster of emotions. Tears, happiness, anger; it’s all there. I can’t say enough about how good this book is!

We start the story with Dr David Henry delivering his own twins in the 1960’s. He delivers one healthy boy and a girl with Downs Syndrome. He quickly decides to tell his wife that the daughter died to save her from the heartbreak of institutionalizing her own daughter. He gives the baby girl to a nurse and asks that she take the baby to the institution.

The nurse doesn’t take her though, she decides to keep her. And so our story starts, with twins on two different paths of life. .

This is for sure a to read! There is so much I don’t want to spoil about this book, but it is amazing.

On a winter night in 1964, Dr. David Henry is forced by a blizzard to deliver his own twins. His son, born first, is perfectly healthy. Yet when his daughter is born, he sees immediately that she has Down’s Syndrome.

Rationalizing it as a need to protect Norah, his wife, he makes a split-second decision that will alter all of their lives forever. He asks his nurse to take the baby away to an institution and never to reveal the secret. But Caroline, the nurse, cannot leave the infant.

Instead, she disappears into another city to raise the child herself. So begins this story that unfolds over a quarter of a century – in which these two families, ignorant of each other, are yet bound by the fateful decision made that long-ago winter night.

Norah Henry, who knows only that her daughter died at birth, remains inconsolable; her grief weighs heavily on their marriage. And Paul, their son, raises himself as best he can, in a house grown cold with mourning. Meanwhile, Phoebe, the lost daughter, grows from a sunny child to a vibrant young woman whose mother loves her as fiercely as if she were her own.

This was such an interesting book! This is rooted in drama that is so true to the world we live in, and it's lived out by two characters that feel so real. I loved seeing how they handle all the problems! This had a great legal plotline that brought the #courtroomdrama I love, but it also wove in a #lovestory that was wonderful. I thought this was a beautiful story, and I really enjoyed it!
Oh my goodness, I so enjoyed this book! I loved going back to the world where I met Fable. It was fun to read a story that was in the same world, but not about the same person. Bryn is a character that you want to see succeed. She's strong and quite awesome, but she's been dropped into a world that, while prepared for in some ways, she still has a lot to learn about. This story was more focused on the family drama with smaller moments of action. I enjoyed learning about the family and their separate "businesses". I loved how Bryn learned to adapt and find her own way. Overall I thought this was a great story from an awesome author!⠀⠀⠀⠀⠀⠀⠀⠀⠀
Happy Saturday Friends! How do you like to spend your Saturdays? Do you sleep in or wake up early? Is it a chores day or a relax day? I like to sleep in an extra hour or so, and I like to get stuff done so Sunday can be a relaxing day!⠀⠀⠀⠀⠀⠀⠀⠀⠀
It's finally Friday friends!! We have had a plague of illnesses at our house over the last two weeks, and I am so looking forward to a weekend where everyone is (hopefully) healthy!