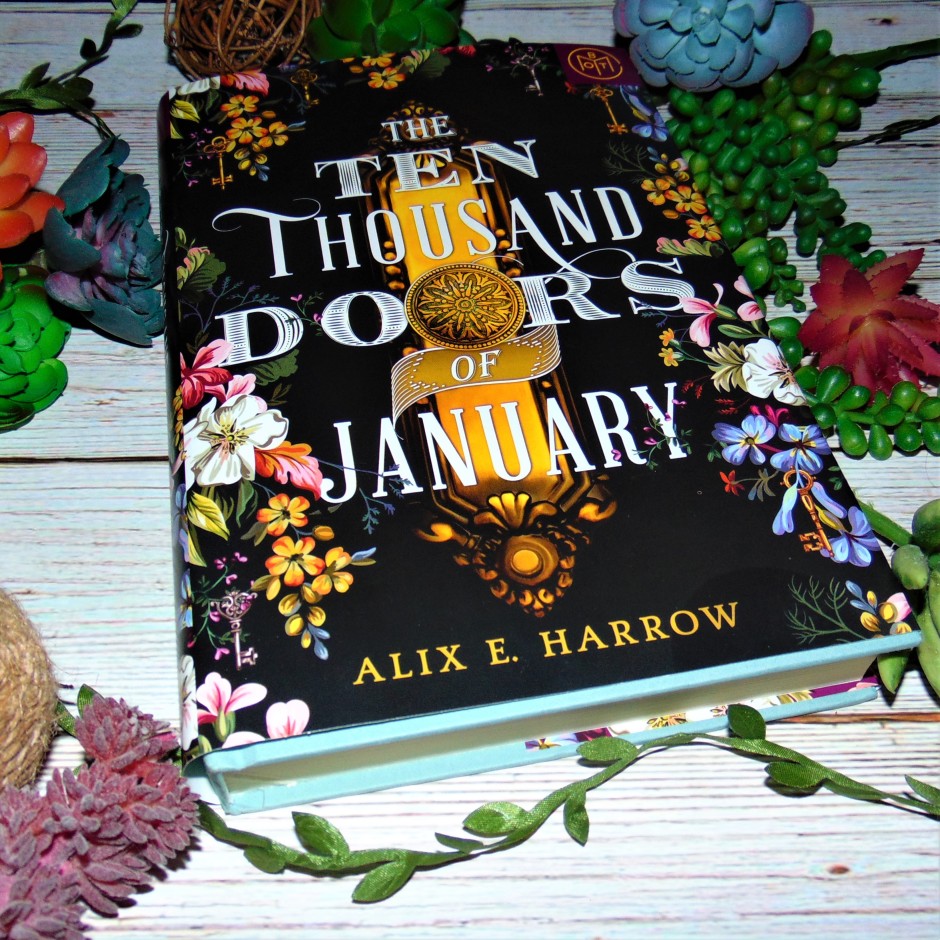 The cover must be the first thing that I discuss in the Loved section of my review. As I have said many times before, I buy books based on the cover alone. I go into the book blind, completely swayed by the cover for making my purchase decision. Sometimes that leads to disappointment, but NOT THIS TIME! The beautiful artwork of this book just drew me in.

The title was also really intriguing, The Ten Thousand Doors of January. Are there really Ten Thousand Doors? Are they only in January? I had so many questions, but I knew I would have to wait until I started the book to find the answers.

Oh my goodness, this book!! I just loved everything about it. I have no complaints, only love.

The characters were so well-built. January had such depth and strength to her. There were a few times in the book where I was like, “No January, that’s going to hurt” but she did what needed to be done. Always. The villains were true villains, making me hate them the more I got to know them. The supporting characters were wonderful. They all had their own story, and yet I didn’t feel like we spent much time on backstory. Alix Harrow just weaved their stories right in and never missed a beat.

The narration is written with the main character, January writing her story down, so she is speaking directly to the reader. I really enjoyed this point of view. There were times where she had me smiling at the way she spoke directly to us, and other times where I felt her heart break. It was so well done.

Something about having a child bends you back to your beginnings, as if you have been drawing a circle all your life and now are compelled to close it.

The story is just amazing. January is writing her story down and in her story, she finds a book, which she also writes down. So, there is a book within a book. The very first time we dropped into the first book I was a bit skeptical, but all of a sudden, I was invested in both stories. The writing did not disappoint.

Speaking of the Writing, I was blown away by Alix Harrow’s descriptive story. Her words just draw you in like nothing I have read before. I have quotes sprinkled into this post to give you a feel for her writing. I found it utterly beautiful and meaningful to me.

It’s stupid to think things like that. It just gives you this hollow, achy feeling between your ribs, like you’re homesick even though you’re already home…

The Ten Thousand doors of january by alix e. harrow

Overall, the entire book was wonderful. I am SURE this will end up on my 2020 Top Reads list, and it is only January. With powerful writing, strong characters, and a story that will knock your socks off, The Ten Thousand Doors of January is a wonderful read!

Content Warnings: There is one small scene with animal harm in it. It’s brief, but here’s the warning.

Maybe all powerful men are cowards at heart, because in their hearts they know power is temporary.

You will enjoy this book if you like fantasy built around the world as we know it. Historical fantasy lovers will be very happy to have read this book as well!

Where To Find This Book:

Worlds were never meant to be prisons, locked and suffocating and safe. Worlds were supposed to be great rambling houses with all the windows thrown open and the wind and summer rain rushing through them, with magic passages in their closets and secret treasure chests in their attics.

January Scaller lives with Mr. Locke, a guardian of sorts, while her father travels the world finding treasures. She is constantly missing her never-present father, and often looks to Mr. Locke as a secondary father. Thankful when given any praise or small gift, she finds herself craving a family with a mother and a father, together under one roof.

January finds a book hidden away in one of the many rooms in Mr. Locke’s mansion. She is sure it is another gift from her guardian, but as she reads, she is whisked away into stories of fantastic proportions. Doors that open leading to new worlds are filled with exciting adventures and as she dives into this new book, she finds there may be more truth to it than she originally thought.

All Amazon links are affiliate links.

4 thoughts on “A Fantastic Five Star: The Ten Thousand Doors of January by Alix E. Harrow”