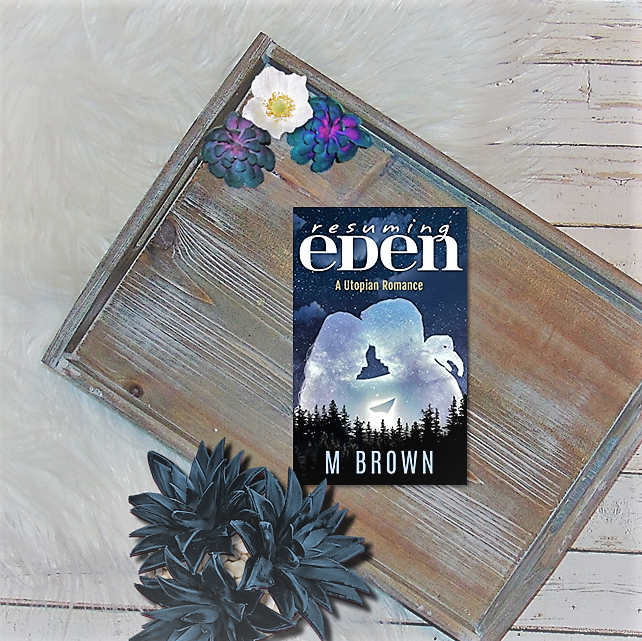 Resuming Eden had SUCH an interesting world! I was truly fascinated with the concept of this story. There were so many intricate details that showed how well the author thought through the world before writing.

The Characters: While there are a variety of characters in this story, there are three that I felt impacted me in some way.

Aahana is the main character. My feelings towards her were a bit all over the place. At times, I found her cold and calculating, but then I would forgive her for these faults because of her struggles and the events in her history. I couldn’t quite connect her dismissal of Matt as a suitable boyfriend. As pieces of information were given throughout the story, I would understand her better, but overall, I do think she was a bit too harsh on Matt. Her character overall though was the reason this story was so intoxicating. I WANTED to see her fall for Matt. I wanted to see her find the path to Truth, Honor, Trust, and Faith. I appreciated her fierce determination to keep her family safe. I found her to be a complex and interesting character.

Matt and Jay were a fun team, and I thoroughly enjoyed every scene they had together. Their relationship was fun and supportive. Matt was so absolutely determined to keep Aahana safe and help her find the right path in life. I enjoyed watching him do this. His love for her was adorable. I liked Jay’s part in their romance. He was always behind the scenes helping Matt along.

The Writing: This was a well-written book with a backstory on the characters that was revealed at just the right times. I enjoyed the overall plot and the telling of the story. The very beginning had me a little confused, but that tends to happen with this genre, as there is a new world the reader is being immersed into and must learn about. I felt that M. Brown did a great job of helping me to understand the events that led to that opening scene in the following chapters. After that, I understood what type of world I was in, and what was going on. The creation of this story overall was great. I enjoyed the idea of these pods of people that were trying to rebuild their lives and prepare for the future. One of my favorite things about a post-apocalyptic or dystopian story is seeing how the characters start over. Resuming Eden had a unique way for the characters to do this, and I really enjoyed reading about it.

The Length: The book is a bit long, at just over 600 pages. I enjoyed the story, and I do still recommend this book to readers, I just thought that there could have been some scenes that were reduced in length to shorten the book a bit.

Content Warnings: Reference to an instance of sexual abuse in a non-graphic way. Reference to parental death.

Overall: I quite enjoyed this book! I found the story to be intriguing and the characters to be interesting. I found myself absorbed in the idea of this new world and I loved following the relationship growth between Matt and Aahana.

I would recommend Resuming Eden for readers that enjoy a dystopian novel about rebuilding in the aftermath of an apocalypse. If you enjoy clean romance, this is a good one for you, as well!

Resuming Eden by M. Brown is available at these sites.

She wants to keep her family safe. He thinks the enemy can be trusted. Will they join their hearts in this utopian tomorrow?

Santa Cruz country, sixty-six months after The Square arrived. Aahana will do anything to protect her post-war family. So when she’s ripped from the safety of their bunker by the same alien who murdered her father and now holds her 13-year-old daughter, her instincts scream resist. But her heart’s divided when her bunker landlord shows unexpected changes. What has come over Matt?

Matt spent the past sixty-six months trying to win Aahana’s heart. With his close friend vouching for the alien—though looking years younger—he’s certain they have nothing to fear. But his stubborn girlfriend is on the path to destruction if she won’t follow the new rules. Can I save Aahana?

Despite Aahana’s growing distrust and Matt’s sense of belonging, the two survivors begin to trust each other as they meet again in paradise. But even as Matt declares his trust in their alien overlord, Aahana’s secret rebellion threatens to tear the lovers apart.

Can Aahana and Matt build a bright tomorrow for their camp and their budding partnership?

Resuming Eden is a sweet utopian romance. If you like strong heroines, opposites-attract second-chance love stories, and a dash of near-future speculative fiction, then you’ll adore M Brown’s post-apocalyptic saga.

At 602 book pages, Resuming Eden is a double value at nearly twice the length of most romance stories.

I was provided an advanced reader’s copy of this book for free. I am leaving my honest, unbiased review voluntarily.

All Amazon links are affiliate links.

𝓖𝓲𝓿𝓮𝓪𝔀𝓪𝔂 & 𝓡𝓮𝓿𝓲𝓮𝔀!
𝗛𝗮𝗽𝗽𝘆 𝗣𝘂𝗯 𝗗𝗮𝘆!⠀⠀⠀⠀⠀⠀⠀⠀⠀
Wow. This book was terrifying, and yet utterly amazing. I will put an enormous caution to readers out there. There is very violent animal abuse in this, and it was hard to read. The author cautions the reader at the beginning of the book, which I really appreciate.⠀⠀⠀⠀⠀⠀⠀⠀⠀
This book was so freaking good!!! This is a post-apoc story with a strong female lead, but told through multiple views then weave together to tell a heart-racing story of desperation, danger, and survival. I was sucked into this one from page one, and I couldn't put it down! I did realize about halfway through that this is book 2 in a series, but honestly, I was able to read this as a standalone, however, I want to go back and read book 1 now!⠀⠀⠀⠀⠀⠀⠀⠀⠀