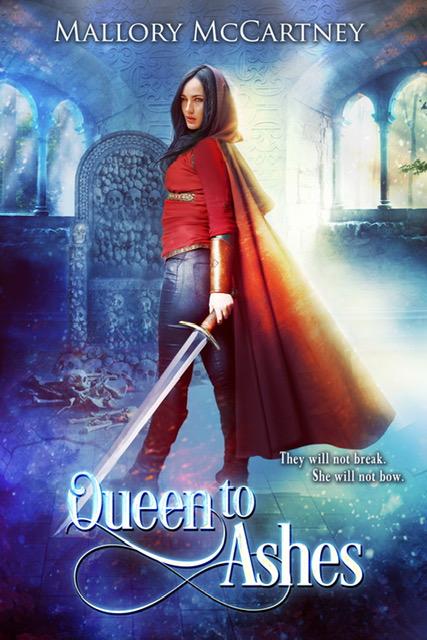 What a wonderful sequel!! I am always so, so happy to find that the second book in a series not only lives up to the first but does even better! Queen to Ashes was an absolutely wonderful addition to the Black Dawn series.

Picking up at the end of Heir of Lies, we find Emory, the rightful Queen of Kiero, fully immersed in her new world. She still doesn’t have all of her memories and struggles to remember so that she can save her people. The action seems to never end for these characters! It was just packed with things happening that kept me turning the pages!

The characters are just as wonderful as they were in the first book. I really enjoyed Emory’s character growth. I feel like she’s really embracing who she is, and I have enjoyed seeing her evolve.

The villains feel especially vile in this story, and I love it! I liked how detailed McCartney makes them, creating such a real-feel to each persona. Having these awful characters in the story made their losses and defeats so much sweeter.

Overall, I was so happy to have this story in my life! I enjoyed Heir of Lies, but Queen of Ashes has become my favorite! I am excited to see this story continue!

I would recommend Queen to Ashes for readers that like a magical fantasy with a strong heroine. I would highly recommend that readers read book 1 in this series, Heir of Lies, before jumping into this book. I think you would find the book much more enjoyable if you read the first book before starting this one. If you haven’t read book 1, I have a bit of a synopsis and link to my review farther down in this post.

Queen to Ashes by Mallory McCartney is available at these sites.

“You lived your entire life feeling like half of you was missing. Fight for the missing part. Fight for this.”

Emory Fae has abandoned everything she thought she knew about her previous life on Earth. Stepping up to her role as Queen of Kiero she makes a startling sacrifice- feigning her allegiances to Adair Stratton, the man who murdered her parents and casted Kiero into ruin. Emory’s memories slowly piece together, and she soon realizes the Mad King may not be all he seems— and the man who was once best friend, may be fighting beneath the surface.

With the King’s attention on her, can she buy Black Dawn Rebellion enough time to recuperate their forces? And when the times comes, will she be able to kill Adair, ending his tyranny and rising herself as the rightful Queen? Fighting to hide her secret, Emory navigates the brutal trials of the Mad King, trying not to lose herself in the process.

Sequel to Black Dawn, now a bestselling series, the sparks are ignited, as Emory learns the cost of freedom, and her title. Will the rebels unite in time? A sinister force has spread across the land, stripping everyone bare- their betrayals, their secrets, their intentions. But above all, what will their decisions cost? By refusing to give in to the darkness, will Emory rise as Queen?

“Hope was a dangerous thing. It could consume every dream and make them take flight, becoming wild daydreams in one’s heart and mind. Or hope could incinerate everything you thought you knew, burning you down to your core, leaving you raw and exposed for the world.”

Emory Fae has only known one thing—life at The Academy, a school for those who have special abilities. Following in her parents’ footsteps, the pressure to uphold their dream falls on her and one of her best friends—Adair Stratton. An outcast and feared by most, Adair longs to break away from the expectations dictating his future. With whispers of dark magic spreading across Kiero, Adair starts to doubt The Academy is all it seems.

An unexpected visit ignites new tensions as the roguish king from across the Black Sea, Tadeas Maher of the Shattered Isles, and his heir, Marquis Maher, sail to Kiero. Notorious for their pirating and wrath, for the first time in years, they demand the Faes listen to their proposition for a new treaty. Caught in the middle of politics, Adair and Emory, with the help of their best friends Brokk and Memphis, search for the one thing that matters the most—the truth.

Their world is tipped upside down as unlikely alliances are made, and war ravages Kiero. Through the throes of betrayal, lies, hidden magic, and love, Adair is faced with a life changing decision. Will he fight or bow to the darkness within?
But, Adair’s decision will change the course of Kiero forever, setting in motion irreversible destinies for everyone at The Academy as Emory Fae rises as heir.

Heir of Lies is the first book in the bestselling Black Dawn series.

The Black Dawn series is re- releasing and “Heir of Lies” (book one) is coming April 21 2020! This edition will have an exclusive map and bonus content!

Here’s a link to my full review of Heir of Lies by Mallory McCartney.

Mallory McCartney currently lives in Sarnia, Ontario with her husband and their three dachshunds Link, Lola and Leonard.

When she isn’t working on her next novel or reading, she can be found day dreaming about fantasy worlds and hiking.