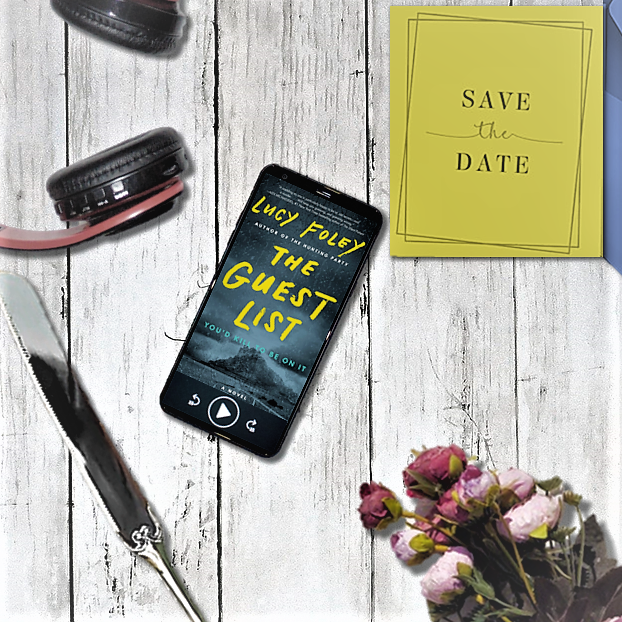 The Guest List had so many questionable characters and it made it impossible for me to figure out who the killer was. I loved that suspenseful feeling the story gave me! Every chapter brought new information, building a motive for each character!

The story is told through the point-of-view of multiple characters as well as an omniscient narrator. The narrator’s story is told in the present, during the discovery of the murder. The other POV’s sort of rewind to the beginning of the weekend and progress in time to the wedding night and murder. I thought that the author found a way to write these different views in a way that was easy to follow, which was much appreciated! Each chapter started with the character’s name as well as their character title, such as “Wedding Planner”, “Plus One”, and “Bridesmaid”. These labels helped to keep everyone straight throughout the story.

Everyone has traveled to a secluded Ireland island for the wedding of Jules and Will. Each character has something to hide. The book starts with an “event” that has happened at the wedding, but you don’t quite know what it is. You do know that it’s not good. There’s clearly chaos and confusion, but it’s a mystery. As the story progresses, you learn about each character and their connections to other characters. More details about the “event” are revealed and you begin to suspect everyone of everything!

The location was a secluded, exclusive island, offering an additional element of creepy that I really enjoyed. Every time someone went off on their own I felt myself get a bit more nervous. It’s dark, there’s a cliff’s edge, and there are mysterious rumors surrounding the island. It all helped to build the world the story was placed in, and I liked it!

I really didn’t like any of the characters. They all have their own secrets and their reasons for being deceptive. That didn’t stop me from absolutely enjoying the story, but don’t expect to connect to anyone in this story 🙂

I listened to the audio version of The Guest List through Libro.FM. Each character was narrated by a different person, which helped to separate the characters and their POVs. I liked each of the narrators, found them easy to understand, and enjoyed their characterization of each person. I would highly recommend the audio version of this book if you enjoy listening! Listening time is 9 hours and 54 minutes.

I would recommend The Guest List for readers that enjoy a who-dun-it type mystery with elements that are reminiscent of Agatha Christie.

The Guest List by Lucy Foley publishes on June 2, 2020 is available at these sites.

Set on a remote island off the Irish coast, this is one guest list no one would want to be on, just as no one would have wanted an invitation to the New Year’s Eve party in Foley’s previous novel, The Hunting Party.

Lives unravel amid the revelry on an eerie and remote island as family and friends assemble for a glam wedding in an updated Murder on the Orient Express. Each of the principal characters has a reason to want one of their number dead, there are old secrets, and one of them is murdered.

I was provided an advanced listening copy of this book for free. I am leaving my review voluntarily.