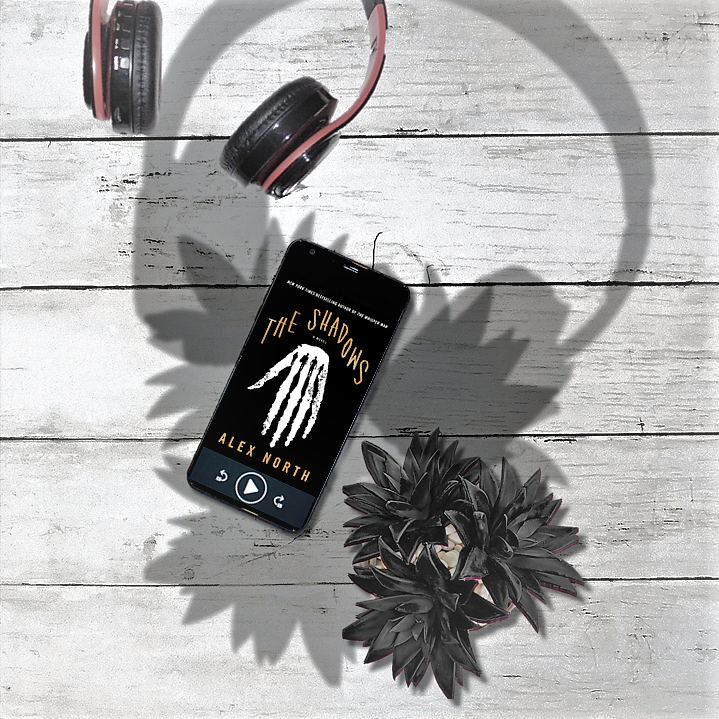 I loved the creepy characters in this story. Alex North does a great job of describing his characters and really allowing the reader to imagine each person. He makes them feel real, like they are coming right off the pages and being brought to life!

The Shadows takes the reader into a story that starts 25 years ago when two teens were part of a murder. While one boy was captured, Charlie Crabtree escaped, disappearing without a trace. Now, Paul Adams, who was linked to the original crime, must return to his hometown to help care for his elderly mother. His mother keeps saying things about the murders…she seems to know more than Paul thought. When a copycat killer starts bringing up the past, Paul must face his past and question everything, and everyone.

This story was spooky and creepy, but I wasn’t absolutely terrified like I thought I would be. Which is honestly, fine with me. I don’t really like having to read with the lights on and my back against a wall! The plot was a bit complicated, and I think that it ultimately led to me being a bit less scared. The timeline jumps around, and there are people in the dream world as well as the real world. It created a very unique, but confusing story. I ended up never really settling into the plot and just falling into the world because I was concentrating so hard on where we were and with who. I think that this would be good to go back and read a second time. I might enjoy everything a bit more, already knowing who was who.

That being said, this was still a really good story with wonderful writing by Alex North!

The characters that North creates are fabulous. He has this perfect mixture of personality traits that makes for just the right creep-factor. Charlie Crabtree is a terrible character, and I think we can all agree that he’s the root of all evil. Thanks Alex North for adding this man to my nightmares!

The plot had some great twists that I didn’t see coming. It will absolutely keep a reader on their toes, and while there might be people that can guess some of the twists, I think the plot will provide surprises for any thriller-lover!

Overall, I enjoyed The Shadows. The complicated plot did not completely stop me from enjoying the story, it just slowed me down a bit. I enjoyed the pace and the characters!

I would recommend The Shadows to readers that enjoy a creepy mystery!

The Shadows by Alex North is available at these sites.

You knew a teenager like Charlie Crabtree. A dark imagination, a sinister smile–always on the outside of the group. Some part of you suspected he might be capable of doing something awful. Twenty-five years ago, Crabtree did just that, committing a murder so shocking that it’s attracted that strange kind of infamy that only exists on the darkest corners of the internet–and inspired more than one copycat.

Paul Adams remembers the case all too well: Crabtree–and his victim–were Paul’s friends. Paul has slowly put his life back together. But now his mother, old and senile, has taken a turn for the worse. Though every inch of him resists, it is time to come home.

It’s not long before things start to go wrong. Reading the news, Paul learns another copycat has struck. His mother is distressed, insistent that there’s something in the house. And someone is following him. Which reminds him of the most unsettling thing about that awful day twenty-five years ago.

It wasn’t just the murder.

It was the fact that afterward, Charlie Crabtree was never seen again…

I was provided an advanced listener’s and reader’s copy of this book for free. I am leaving my review voluntarily.

One thought on “The Shadows by Alex North”

Strong Female Character 💕 Fake Relationship 💕 Emotional 💕 Adorable​​​​​​​​
I really loved this book! If you enjoy fairy tale retellings, check this one out!​​​​​​​​
Happy Sunday! Today's title has inspired a question...what's your plan for Sunday afternoon? Our kiddos had a sleepover at grandma and grandpa's house, so we're headed to grab them!​​​​​​​​
Happy Saturday! What are your plans for the day? We haven't quite figured out what we're going to do today, but I'm sure it will be fun!​​​​​​​​